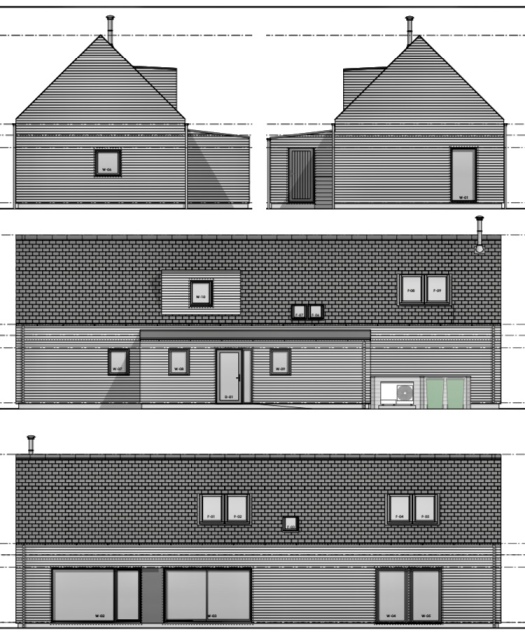 Building Warrant came through a few days before Christmas. It was a great start to the festivities!

This is what we are building. It’s a 1.5 storey larch clad eco longhouse with traditional slate roof.

Once the architects are back after the Christmas break we’ll start looking at build schedules. Can’t wait!

The weeks are flying by.

Progress is at last happening with the building warrant submission, and we’ve been busy with power points, drainage, guttering, flooring and window specifications. We are almost there, and with a following wind and a call with the energy consultant we should hopefully be able to submit final warrant drawings in the next week.

I think that the hardest thing about this time is stopping myself going crazy trying to make this home perfect. It doesn’t need to be perfect.

I need a serious dose of pragmatism and a bit of a reality check at times. This is difficult whilst being constantly bombarded with images of stylish, deceptively simple design, which is usually fiendishly expensive.

Actually, my husband doesn’t suffer with this – it’s just me. I want to reuse, simplify and recycle, but I’m often conflicted because I buy into the aesthetic. I want our environment to be restful, and natural, and beautiful…

Every time I see a gorgeous wood floor (the latest one was wide-board limed Douglas Fir) .. it’s way over budget. I need to keep telling myself that there’s no need to spend that kind of money. What we think is reasonably priced is perfectly fine. It really is.

It’s even worse when it comes to furnishings. For the most part, the furniture that we have is perfectly usable. However, it’s a bit of a mash-up of styles from many previous homes, and the temptation to sell it all and start again with a clean, new, streamlined home is very strong.

This is both unnecessary and potentially financially ruinous, so we’ve been looking at a few key things that we may need to change (sofas, rugs) and are working out how we shed the rest via eBay or charity shops. We can always recycle some of the other things like side tables with a lick of paint. Repeat after me, you do not need that designer birch strip side table. You really don’t …

I don’t want to be part of the consumer bubble replacing perfectly good things for the sake of it. We already have too much stuff.. and it’s key that we resist the constant and insidious pull of commercial consumption.

Apparently, the latest thing in bathroom chic is to have your bathroom appliances (eg. toilet and washbasin) suspended from the wall. Nothing between them and the ground except fresh air and a tremulous fear of suspension.

Why? I asked the bathroom consultant. What’s wrong with them being floor mounted? Have they not been that way since time immemorial?

Difficult to clean, he said, delicately. You have men in your home?

I sort of get that swishing a mop under a wall mounted toilet is easy, but seriously? How difficult is swishing it around the base of a floor mounted toilet?

Perhaps it requires manoeuvres that the current generation haven’t evolved or mastered. Maybe I get that. But I also get that the process of house specification has a lot to do with trends, and I had seriously missed that even a basic croft house would be subject to that.

I am finding the process of specifying flooring, sanitary ware, tiles, kitchen units and worktops much more tiring than I expected.

It’s such a privilege to be able to do this in some ways, and so important to get right, but the endless choice is so wearying. Some days I just want to curl up and have someone present me with my perfect kitchen/bathroom and say…

Yes! It can be yours, and it’s within budget….

I’m focusing on the fun.

When you’re eager to be somewhere, time passes slowly. This is a picture of the rocky shore down from the Church on the Sleat Peninsula, close to where the croft is. This image helps me with the passage of time.

Every now and then when we’re knee-deep in roof light specifications, or looking for the fiftieth time at how best to configure the bathroom, I pull up all the photos that I can find of the township, the croft or its views, and remind myself why we’re doing this. And I breathe more slowly…

It’s difficult to describe what we want so that architects and kitchen or bathroom planners understand clearly. We are realising that anything that deviates from the perception of the norm causes problems. Because we are clearly not normal.

For example, it appears to be inconceivable to certain kitchen designers, who have a preconceived idea of what needs to go into our space, that I do not want a steam oven. Or why a single small kitchen sink with no draining board area would not be perfectly adequate. Or why I could not live without individually programmable humidity-controlled salad drawers in the fridge….

Trying to keep things simple these days is clearly out of fashion.

Believe me, I know that this sounds strange coming from the lips of someone who has spent a lifetime working with technology, but I don’t want to have to programme my appliances. Even the induction hob that we were shown had reconfigurable cooking zones….

I’m happy to listen to experts and take on what works for our lifestyle, but over-engineered appliances just seem to me an exercise in unnecessary expense.

I am looking at my calming picture of the shore. I am breathing.

We are making progress…

We’ve just heard from the architects that planning permission for the longhouse on our croft has been approved. It’s a major milestone for us on this journey, and I’m so happy! Our home has just moved one step closer to becoming a reality.

Next it’s starting work on the building warrants and the more detailed specification for the build, which we are lined up to do in the coming weeks.

In preparation for this we’re travelling up to Fife soon to meet with the kitchen and bathroom planners to discuss what these rooms will be composed of, what we like, and what we can afford.

It’s been a bit of a revelation to me that people can (and do) spend many thousands of pounds on a bath… I keep repeating the mantra “keep it simple, keep it simple” so that I don’t get sucked in by the sales pitch on the latest and shiniest new version of anything.

We are not shiny people. Stone, wood, plaster, paint, wool and linen fabrics. Natural finishes, and as little plastic or gloss as possible, that’s our philosophy. We want to have a home that’s comfortable and functional to live in rather than a showhome.

It goes without saying that whatever we don’t spend on the house leaves us more money to spend on trees.

A glass of fizz this weekend may be in order.. 😋 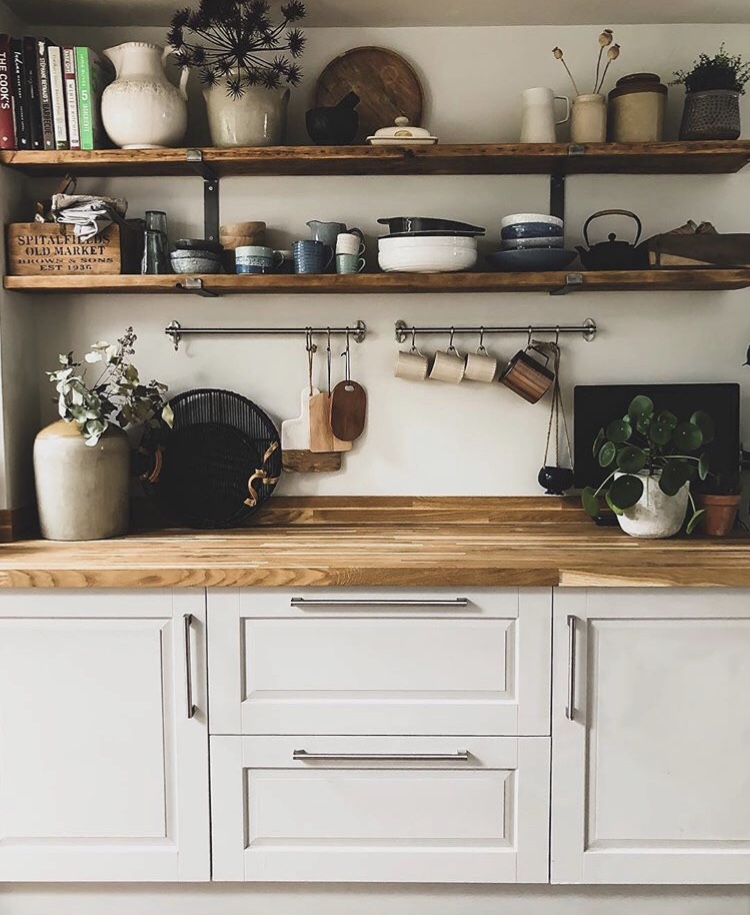 I think of the kitchen as my space in a home. It’s where I spend most of my time, where I create, and more often than not in recent years, where we eat. So I want to get it right.

Despite being ancient and having lived with more kitchens than most people have had hot dinners (which you would think would have filled me with the wisdom of Oracles) I’m finding myself struggling with the design of my perfect kitchen.

There’s simply too much choice.

I’m trying to keep it simple, basic, streamlined and uncluttered, but with the important elements being the best quality that we can afford. We hope that we will have this kitchen for a very long time. What doesn’t help is that we have a lot of stuff…

In support of this, and as well as a mammoth clear-out planned, we’ve designed in a separate pantry and utility room for all the cleaning stuff, laundry, home bottling, dog things, preserves, bags of flour and all the less glamorous yet essential bits of everyday living that drive me crazy if I have to battle my way through them in order to cook.

I’m sure about a couple of things, though, born of many years of kitchen frustration.

1. Worktops – I want my kitchen worktops to have heat-proof surfaces, because I’m tired of trying to wrestle things out of the oven and having to balance them on trivets or onto the hob in order to get to their contents.

2. Cupboards – I want accessible cupboards, or preferably, drawers. Being only 5″4′ I find that most overhead kitchen cupboards are just too high to be usable for me, and badly planned low-level cupboards require the arms of an octopus to get to the areas at the back.

You have no idea the number of times I’ve cleared out a cupboard after many years of use only to find something pushed to the back which has developed a new life form..

3. Lighting – lastly, well planned lighting. Most kitchens that I’ve used have badly thought through, non-directional, inadequate lighting. There’s nothing worse (or dangerous) than trying to chop things standing in your own shadow.

We will need to plan this well 🤔

According to the design statement from the architects, we’re building a “subtle neo-traditional Scottish dwelling that alludes strongly to the longhouse design whilst incorporating a modern, energy efficient interior”.

The phrase neo-traditional had us both hooting with laughter. Honestly, the marketing speak that gets rolled out in the interest of persuading planning departments!

It will be a very simple, slate roofed, larch clad house.

It should sit low and silver slowly and quietly into the landscape amongst the trees. It will be well insulated, snug and energy efficient.

We’re running final checks on the planning permission pack this weekend, then off it will go into the laps of the planning department of the Highland Council to seek it’s fortune.

We have everything crossed that it is accepted. Another milestone reached on our journey…